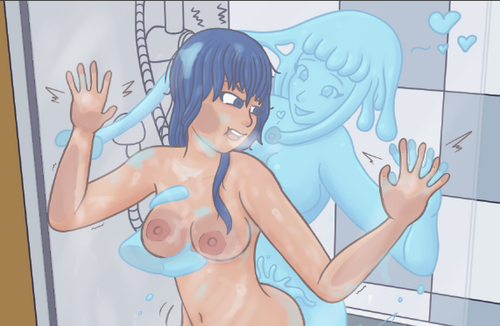 [0.3.2c Bug Fix - Added new Skill Crystal to the Manor Courtyard and Somewhere Between Time and Space.  Use this to learn skills that were added later in development for older saves!)

Today marks that it has been one year since I uploaded the first build of Mira Co Rescue to itch.io! It has been an interesting year of making art, programming, and bug fixing along with meeting plenty of fans and other creators through this little project of mine.  There is still plenty to do but I figured I would look back over the year and see what I was able to accomplish in this last year.

-168 Unique Battle Sprites that avoid reusing poses as much as possible.  As we move forward it is getting increasingly more difficult to not accidentally share a similar posing...

-16 Event related images.  I'll be adding more events that will add more peril situations outside of the 'dungeon' maps.

-7 Game Over Sequences of 5 images each (for a total of 35 CGs).  Only one more Game Over to do for Emma's Garden then we'll have two maps with their respective Game Overs implemented.

With all the face images, on map items, peril icons, custom battle backs, and changes to various systems there is probably over 300 art assets I've completed over the last year which is a whole lot more than I'd ever get done in a normal year so I'd say it was fairly successful.

I'd like to thank everyone who has viewed, supported, played, commented, and interacted with me throughout this last year.  It has been a very interesting experience that I am glad I took the dive into last year.  While this is still sort of a personal passion project I am happy to see so many people enjoying the content. Here is to another year of game development!

I've also posted a WIP of a new scene.  It seems that someone followed Mira home after clearing out the Forest Path.

happy birthday!
your game inspired me to learn the basics of rpgmaker to pursue a project like yours! if i will ever create something worth, i will send it to you!

Thank you!  I am very happy to hear that more people are inspired to start projects of their own.  The more games, the better : )

Habby birthday Mira Co Rescue, and thanks you Ankhrono for your work :)
I (can't) wait for a future update to make you a little present (tips) for you !

Thank you so much! I am working on getting some new art into the game hopefully before the new year!

Is the WIP scene available in game or is it just the picture?

Just a WIP picture for now, in the game at a later date.