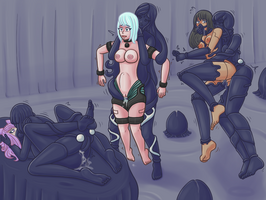 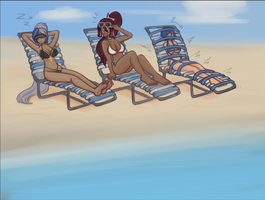 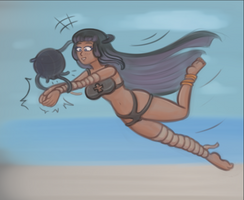 Has it really been four months since I last posted a Status Update here on itchio? I know in the last update posted I said I'd get better on remembering to update itchio more often but here we are....

As a reminder, the most up to date information can be found on the Art Twitter where I post WIPs and Artwork related to the game when I complete them.

Since the last post, The Missing Outfit Side Event was completed in full which can be seen here if you'd like a bit of spoiler.

I also got the second half of the lewdray facehuggers completed so that only leaves the Ceiling Bio Sample left for On Map Events for the Bio-Entity area.

There was a period where we took a full month hiatus due to the kiddo in the month of March and we've been slowly getting back into the swing of drawing since we took a break to watch the kiddo.

It goes without saying that the progress on the Collective Mothership Update has taken a bit of a slow course since August when the kiddo first arrived.  I may need to return to my roots with battle sprites and such to keep the project moving while chipping away at the Collective Mothership which has kind of turned into quite the beast in terms of content and I feel I may have overdone a few things with it.  Although I don't want it to turn into another Khrono Tomb WIP scenario while it gets worked on it may end up that way to keep things rolling.

Since this is a hobby project I feel that striking when the iron is hot typically has ended up with the best results.  The Collective Motership's iron was super hot when we were working on it but has since cooled due to the momentum interruption.  I need to work on something to get that rhythm again so please bear with me as I get that charted.

Speaking of which, some of the sketches I did for May so far included a concept for a beach side area that would be accessible from Hopewell Harbor (City Map).  While this sketch scenario may not be canon in Mira Co Rescue, it was a fun image of Hemmy, (Selena), and Mira relaxing on the beach; however, it seems Selena has found herself inside the body snatching OC Nefret of ShadedSeraphim.

Ankhrono-Tan also seems to have discovered that playing volleyball with a certain group of beach volleyball players is about to end up in a very different method of winning.  Perhaps the Mira Co Rescue crew will soon play a round as well?

Excuse me for the lack of updates here on itchio.   Since I mostly post on the art twitter I tend to forget to update the various forums with these dev log ramblings, especially since they are a little lackluster compared to the past.  I do hope everyone has been having a good start of the warmer spring weather and had a decent Mother's Day.

Remember to stay hydrated, get plenty of rest, and thanks again for following the somewhat slow development of Mira Co Rescue.  Until next time!

PS: Am I crazy or did I post a dev log earlier but it appears to have disappeared.  I noticed some of the older dev logs from years ago have not been retained due to server storage but I feel like a more recent one vanished... might just be me though.